FOLLOW:
Decoding His Signals And Feelings, Did He Lose Interest?

How To Make A Guy Realize He's Losing you - 3 Tips

You ever wonder how to make a guy realize he's losing you? How to make him really understand that he's at risk of losing this relationship?

Maybe you feel like he's taking you for granted...

Maybe you feel like he's not appreciating your relationship...

Maybe he doesn't notice all the ways you love him...

Before you end a relationship, you want to know that you've given it your best shot. You want to see if you can wake this guy out of his stupor and get him to see what he has in you.

That's what we're going to focus on here - How to make a guy realize he's losing you. I'm going to give you some specific ways to hint to him that he's messing this up. 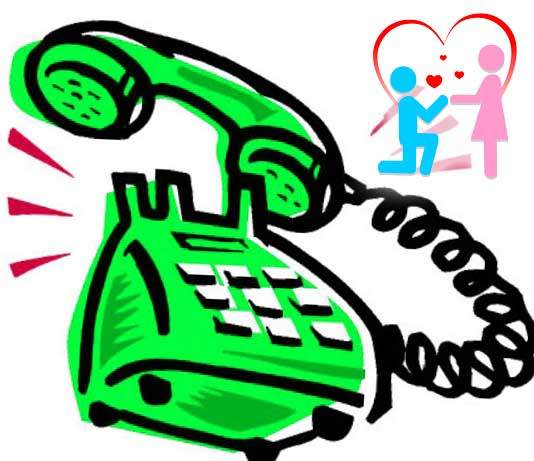 And while it might feel really great to break up, and then have him come crawling back to you, that's not something you want to risk. Especially if he might find some other woman in that time apart...

Of course he was all into you and paying attention at the start of your relationship - before you two had slept together. That's when a man is MOST motivated - when he's working to get you into bed.

You might even be tempted to think that he's only in it for the sex, but that would be a HUGE mistake, too. He wants a relationship. He just needs the right kick-in-the-butt to realize he could lose this relationship.

Before we jump in with how to make a guy realize he's losing you, I have to show you this:

The #1 Mistake Women Make when it comes to getting respect in a relationship...

This mistake comes up because of how you were probably raised and socialized. (And not by your parents, either!)

You see, girls are taught from a very early age that Go Along = Get Along.

Unlike male friendships, which are usually based on shared interests in hobbies and activities, the key to female friendships are self-disclosure and emotional support.

Both of which are often mutually incompatible with demanding to get your own needs met as a woman.

There are women who take the opinion that you need to be liked by and become friends with everyone. SO MUCH that they won’t turn away even from super crappy relationships.

That's an extreme you should obviously avoid. 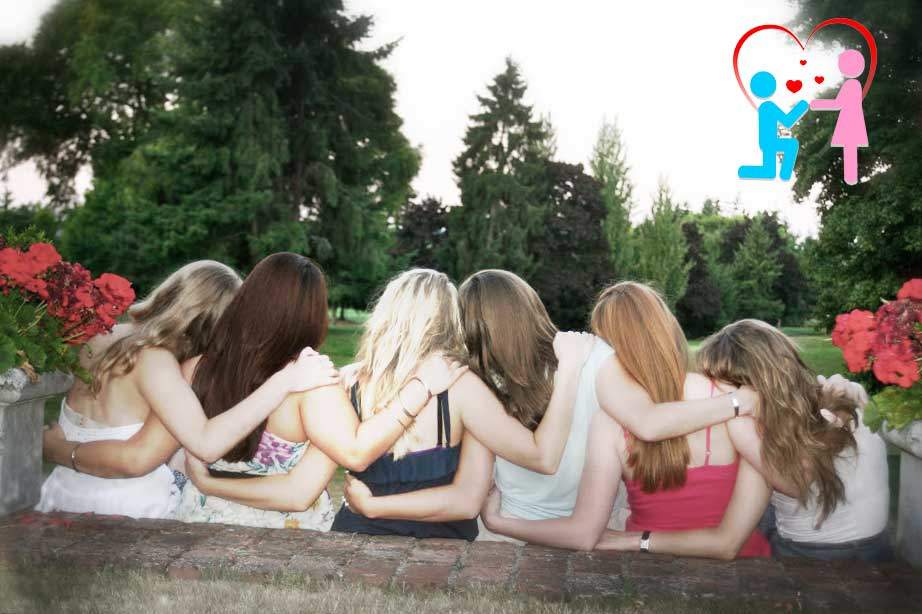 Women are brought up to go along to get along. And it's imposed as THE rule of all female friendships and social cliques.

So be sure to take a good long look at your own habits.  Do you fall victim to this kind of thinking? Are you easily manipulated by your need to be liked and approved of?

If so, you'll want to root it out and manage it. Because it can often lead you into very unhealthy relationships - or prematurely end the good ones.

Now, let's get right into how to make a guy realize he's losing you with:

Make Him Realize He Could Lose You - Tip 1: Let Him Eat Hot... Nothing.

Sometimes the biggest wake-up call for a man is when he starts to sense a change in the dynamic of the relationship.

You see, there is a place in a relationship where a guy thinks he's got the upper hand. It usually happens a few weeks after we sleep with you.

WARNING: I'm generalizing a bit here. But I'm also going to tell you "like it is" and not be "politically correct." That's why you're here - Carlos tells you the TRUTH.

When you've invested a ton of time, emotion, and effort in something, you're going to be much more protective and possessive of it.

Which is why you have to find a place to BACK OFF for a while. 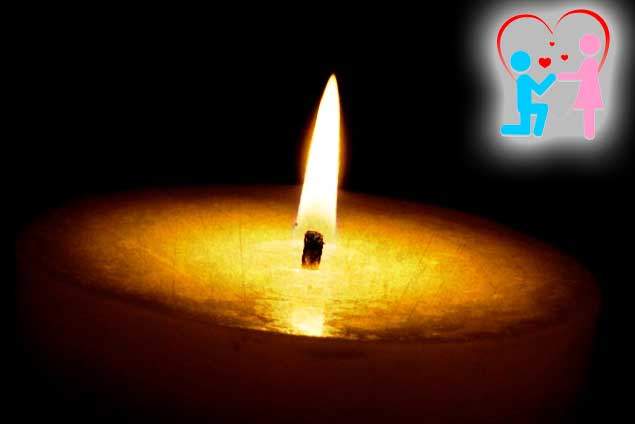 Hide in the shadows...

What I mean is, stop answering his calls and texts for a few days. Give him a little reason to WONDER.

If you feel a bit uneasy about doing that, remember that he's doing it by accident all the time.

And how do you feel when he "goes dark"? When he doesn't answer your calls or texts?

Yeah, you worry, don't you?

I'm not saying to torture the guy, but you would do well to get your life busy enough to forget him for a bit, honey.

It WILL give him some reason to double-check his assumptions about you and his control over you.

Remember what "taking for granted" means: It means that he's assuming you will always be there and take any amount of neglect he dishes out.

When you're always available at his beck and call - pining away for him - you're sending a message that you're infinitely usable. And - ultimately - disposable.

It's not because he's actually eager to use you and throw you away that he's doing this... It's because:

We teach others how to treat us by how we enforce our boundaries.

The only way to respond is to show him that's not the case.

Let me remind you that this is something you cannot TELL a man. Words don't work when it comes to demonstrating power or posture. It doesn't work that way. We respect ACTION.

(Plus - I'm assuming this may have come up in conversation before between you two, and I'll be that he didn't respond to any warnings or threats.)

Which leads me to:

Make Him Worry About Losing You - Tip 2: Be More "Selfish."

We're taught at a young age that being "selfish" is a bad thing. Especially if you're female.

But this is actually a bit of a lie.

Being selfish is very constructive and positive.

You see, that's great advice for a 4 year old that's still learning about sharing and how to get along...

But after about the age of 10, that's a lesson that's either in you, or it's not. And quite honestly, simple interactions with other people reveal and enforce this social rule. Human beings don't actually turn into horribly selfish creatures unless they had a really rotten, abusive childhood.

So when we get older, we often think that putting ourselves first is a huge sin.

When exactly the opposite is true. If you don't take care of yourself, you'll never really be much good to other people.

It's like that part of the speech they give you on an airplane when they talk about the oxygen masks: "Put yours on first before you help the person next to you."

If you don't make sure you're safe and capable, how can you help others?

The irony is that if you always pretend to be "self-less" to get others to like you, you'll probably start to give only to get your own needs met. You'll always be acting from that place of lack in your life. 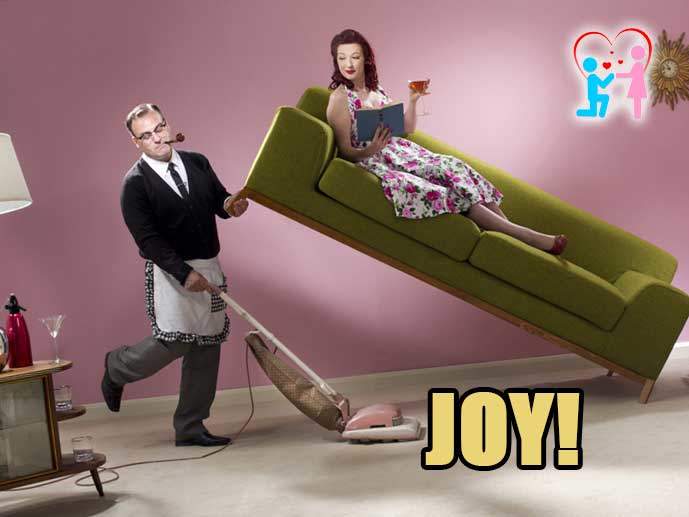 I've seen both men and women that failed to take care of themselves adequately - and how it really messes them up in relationships. The sad part is that women are more often the ones who self-victimize in these situations.

So what I'm telling you here is this:

Stop working so hard to make him love you.

First: It's not working the way you think it is.

Second: That's not what makes a man love you, ultimately.

When you cook his dinner, clean his house, do all the laundry, shop for the groceries, pull his curlies out of the drain, pick up his undies off the floor, and so on - when you do that stuff, he will EXPECT you to do everything for him. As soon as he realizes how reliant he is on you, he'll start working to KEEP that relationship he might lose.

Men fall in love with a woman because she does - in some small ways - "complete him." But mostly he falls for her because he realizes she doesn't really NEED him.

And in that discovery, he sees her strength - the strength that he can add to his own in the relationship.

THAT is how a relationship becomes strong and honest. And, ultimately, how to make a guy realize he's losing you even before there's a problem.

Not through deception and manipulation, but through the multiplication of your strengths and gifts.

Being a couple when you're not married is the same as renting an apartment. It's not so permanent as we like to think.

Marriage is like buying a house. It's still not permanent, but it's a bigger commitment.

Remind him of this "lease" status every so often. You should make sure he doesn't start taking you for granted, of course. But the only way to do that is to make sure he remembers what it was like to NOT have you around. 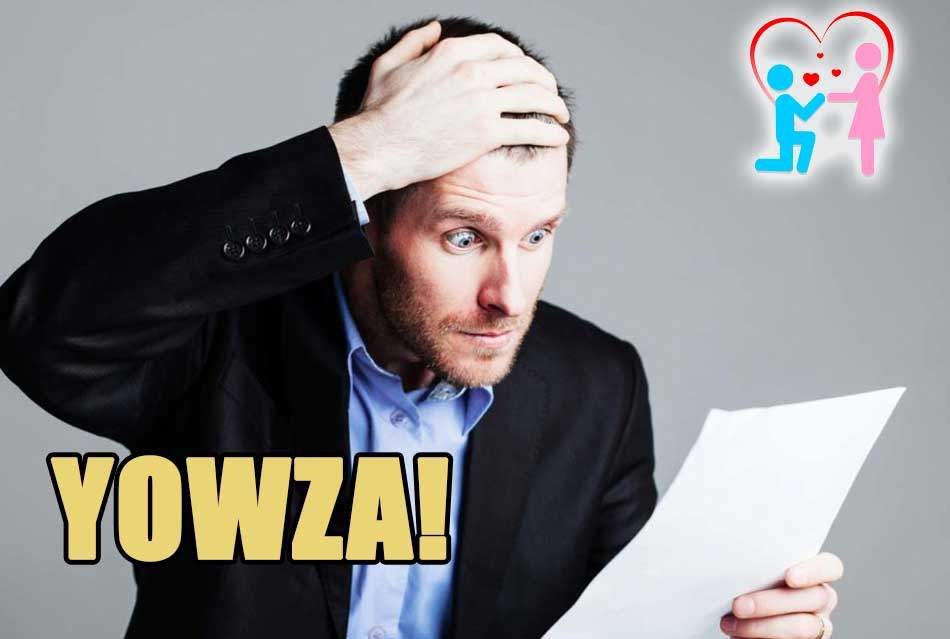 Here are a few ways to remind him about the stability of his "assumptions" regarding your relationship :

I want to emphasize that there is nothing wrong with reminding a man what he's got in your relationship. He's not going to just suddenly wake up in the middle of the night, wake you up and start telling you all the things he appreciates about you.

No one really appreciates what they have til it's gone, as the saying goes.

But you don't have to go that far. And you shouldn't wait until it does!

So you have to know how to make a guy realize he's losing you. 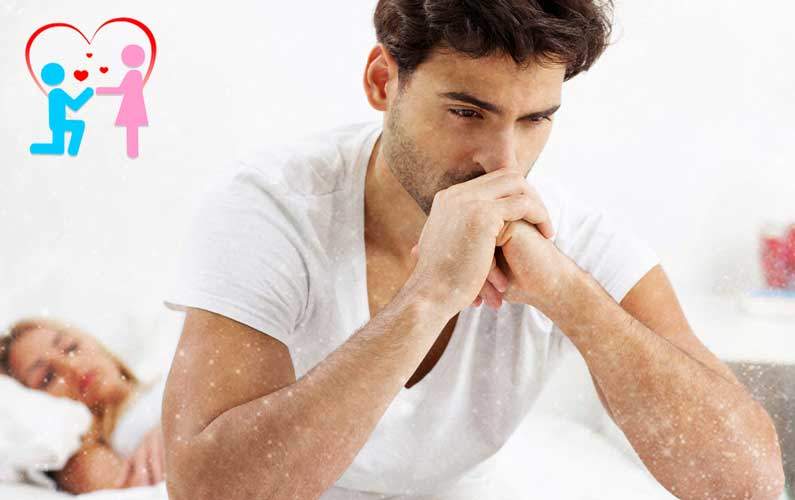 Have him thinking about a life without you...

Remind him NOW about how he could lose you, or you might find him taking a chance on the next woman that comes along. It's up to YOU to keep your value first and foremost on his mind.

Human beings are not naturally wired for appreciation and gratitude. That's why there are so many books on that topic in the self-help section - as well as memorably quotes to help us to realize it.

So don't risk your relationship on his ability to remember it either!

There's a shortcut to getting a guy to appreciate you in the relationship... If you do this before things get tough, you'll never have to do all this work to pull him back to you.

He will commit to the woman who understands what he wants, and WHO he wants...

If you know how he thinks about you and the relationship, you can have him begging you to be your man... And you'll never need to wonder how to make a guy realize he's losing you.

The Secrets Of Commitment