So a date with a guy goes bad and you don’t think it’ll work out. Worse, he seems like a Stage 5 clinger and can’t take “no” for answer.

Will you: a) be upfront and let him deal with the bad news, or b) tell him an outrageous lie which could make things worse?

Well, an English lady went with the second option when she led her Mr. Clingy to believe that she had bitten the big one. 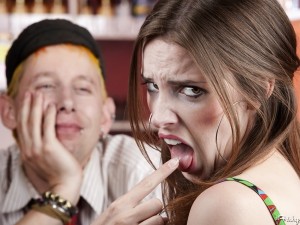 The thing is, she didn’t start out with that lie. She initially told her persistent date that she had contracted some mysterious disease, thinking that would be the end of it.

But since that didn’t stop him (“What ward is she on I will come and visit her now!”), she probably told herself, “Screw this” and hit the panic button. The good news was that he finally backed off after getting that final text.

Who knows if he realized it was a big load of BS all along? Or maybe he fell for it and went into a deep depression.

I’m going for the latter because according to the not-dead lady, he was royally pissed when they saw each other after the whole thing blew over.

The other good news was that the encounter was online, and her suitor had a few choice words for his former date.

She did admit she had it coming, so she probably learned a good lesson in honesty.

As for the persistent dude, I’m going out on a limb to say that he also learned a valuable lesson himself: know when to take a hint.

I think the best thing to do in a situation like that is to just turn down a guy the right way. While that subject may be up for debate (especially if you’re dealing with a creepy or abusive guy), honesty has always been the best policy for me.

In the long run, a man will respect you for giving him the straight dope about why you’re just not into him. Sure, it’s going to sting for a while, but if he’s a chill dude, it’s not going to be the death of him (see what I did there?).

Hell, it might even give him the push he needs to work on himself and improve his dating game.

But if he does act like a douche about it, then that’s his problem. Trust me, I’ve heard some pretty horrible stories from my female clients about entitled guys verbally abusing them (especially with online dating).

When it comes to those men, you can’t win either way, so you might as well tell him the truth. Don’t make things worse by getting caught in a web of lies along the way.

However, if you do happen to like a certain guy, you need to learn an important skill to keep him. I’ve discovered that every man his own Connection Style, and it’s dead simple (sorry, couldn't help myself) to learn it.