How To Connect With Your Guy - Better Than Ever!

When you lose your connection with him, it hurts. I want to show you here a trick for how to connect with your guy.

Look - it happens to all couples: one minute, you think you’re doing just fine, wallowing in perfect bliss with your man. 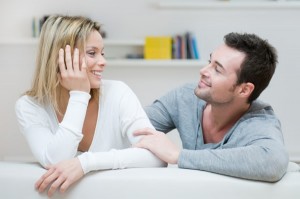 Then suddenly, the little changes catch up with you.

Your dates don’t seem exciting as before, and hanging out with him feels like a chore. You start arguing more; plus, he’s starting to get on your nerves.

Those tingles you felt at the beginning? They’re nowhere to be found, and the connection you have doesn’t seem as amazing as you first thought.

If you find yourself drifting apart from your partner, you should try the following:

Connect with him tip #1: Get Him to Really Listen

One of the most common complaints I hear from women is that men don’t pay attention to them when they’re trying to talk about something important.

The best way to get around this problem is by first understanding how guys operate.

Most women don’t understand that we think differently in the sense that we tend to focus all our attention on one specific thing at a time.

As much as we’d want to multitask like women do, a guy’s mind filters out what it doesn’t deem relevant at the moment. For instance, when guys come home after a long day, they’re likely to focus on winding down before directing their attention on something else.

In this situation, your guy will need time to get into the groove of things first before he can give you his undivided attention when you talk to him.

When you understand this way of thinking, you’ll have an easier time getting your guy to listen to you and connect with him like before. You just have to make sure you have his full attention before bringing up a discussion.

Connect with him tip #2: Work With His Mr. Fix-It Attitude

When you’ve got to get something off your chest, like the horrible co-worker who’s out to get you, I know that you want nothing more than your man to just listen to you.

But sometimes, you get frustrated when it seems like he’s not taking your side. Instead of giving you the empathic, “poor baby” response that you’re looking for, he’s telling you how to deal with the problem.

And I totally get that women don’t really want their guy to offer a solution – knowing that their guy understands their pain is already a relief in itself.

You see, a guy shows that he cares in a different way. When someone he loves comes up to him with a problem, he’s compelled to help her find a way out of the mess she’s in.

Men tend to approach the situation from a logical standpoint rather than an emotional one.

So the next time you want to talk about something that’s bothering you, let him know right away that you already know what to do about it.

Say something like, “Sweetie, I’m going to settle the issue with her tomorrow, but I needed to get it out of my system – it really helps when you just listen to me, you know what I mean?”

Connect with him tip #3: Open Him Up to the Idea of Opening Up

Most guys are a bit guarded when it comes to talking about how they feel – women pretty much know this.

And I know that it hurts when you just want to connect with him like you did before. However, it’s not because he’s deliberately shutting you out.

On the contrary, he might not think that talking about that stuff is the right thing to do. To him, it might seem immature to open up about what he feels.

The fact is that men don’t deal with everyday stuff from an emotional perspective. That means he’d rather give you the facts about his day instead of telling you what he actually felt.

Try to ask him what he thinks rather than what he feels about a certain subject. Then read between his statements and you’ll be able to figure out what he’s really trying to say emotionally.

When he’s done talking, show some empathy by asking him things like, “Ok, so when your boss didn’t go with your project proposal, did you get discouraged? I know I would.”

Sometimes, a guy just needs a little gentle coaxing to open those floodgates.

With a little time, it’ll be easier for him to tell you what he really feels and connect with you, which is the Holy Grail for women.

The connection you share with a guy can AND will weaken as the months and years go by. So, staying connected with him is just a matter of being on top of things.

A big part of that has to do with knowing your man’s unique Connection Style so that he doesn’t pull away from you. A lot of my clients were having a hard time staying connected with their partners until they figured this out.

I can help you get this part of your relationship sorted, too - it all starts here.