How To Be LIKED By Men - One Simple Step

Have you ever wondered how to be liked by men?

Let me show you one simple step. 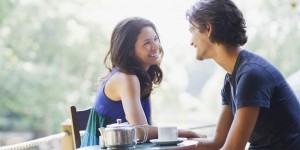 You've probably heard the saying that the first few seconds of meeting someone are the most crucial. If you want to get in that cute guy’s radar in a good way, you’ll need to stand out from the get-go.

But there’s a major hurdle to being liked you need to overcome, however.

In some ways, everyday life has messed up the dynamics of human interaction, making it harder for people to connect.

Just think about how it is when you’re in a crowded public area, like at a mall or airport. People in those places are either too busy or too defensive to be bothered by other folks.

Striking up a conversation seems like the hardest thing to do because it can be intimidating to interrupt a stranger.

Women who hold back on starting a conversation usually think to themselves, “He looks nice, but I don’t want to look like some crazy person trying to get his attention.”

Or maybe they’ll go, “What if I tried exchanging glances with him first, would that turn him off?”

That’s why it can be hard to connect with guys nowadays.

People are always doubting themselves or read too much into a situation, so they end up not taking that leap of faith.

I guess it’s just one of the pitfalls of modern life – while we’re becoming more social online, it’s getting harder for people to create chemistry in the real world!

But like I said, you need to learn the importance of not second-guessing your every word or action. In order to do that, you need to go back to the basics of building rapport with people.

Breaking Through That Barrier

Given how defensive people can be, the easiest way to catch a guy’s attention during those crucial first moments is to warm up to him – little by little.

What do I mean? Well, consider how off-putting it is to deal with one of those overly friendly salespeople who smile all too readily, like they’re putting on some artificial mask.

Imagine walking into a store, then seeing that person with a look that just seems…off.

To avoid looking like that, you’ll have to go about it another way. While flashing those pearly whites is a good icebreaker, there’s one subtle adjustment you need to make.

To pull off a non-threatening look, don’t simply slap on that smile like you turned on a switch and went into “friendly mode” at the drop of a hat.

Instead, try greeting someone with your eyes first, and then let that smile grow on your face - like a flower in bloom.

It’s as easy as that.

The reason why this approach works is that it doesn’t feel like you’re imposing your goodwill on another person. Make eye contact and let the moment sink in; this will make your reaction to the sight of him appear more genuine.

Ever notice when you browse through some magazines at a store or go through an old photo album, and you can’t help but smile after seeing something you liked?

It’s kind of like that with people as well. Give yourself a fraction of a moment to let that pleasure wash over you, then let it gradually show on your face.

Such is the power of non-verbal communication – we all have those subliminal switches in our heads, and it’s really just a matter of pulling the right ones.

So the trick is to let your warmth and friendliness blossom, rather than smiling like it was a knee-jerk reaction. The difference between the two might be less than half a second, but the effect it has on people is HUGE.

It’s like telling someone, “Hey there, attractive person…after taking the time to appreciate your smoldering looks, allow me to express my gratitude for beholding such a beautiful creature by giving you this one-of-a-kind, custom-made smile just for YOU!”

Once you start practicing this simple social habit, you’ll find it loads easier to connect with men.

Speaking of which, I highly recommend that you learn about Connection Styles. Every guy has his own, and figuring this out will take ALL the guesswork out of dating.

You don’t need a psychology degree to learn this skill - getting started is as easy as CLICKING HERE.