What To Do When He Says He's Confused

Have you ever wondered what you should do when he says he's confused?

That's what we're talking about today in this -

Hi Carlos, I bought your program today and have already done 3 modules!

It's definitely very informative and I love the journal idea! I do have a weird issue that I would love your opinion on because I don't know what to do.

In the beginning of may I bumped into a guy that I worked with in high school. We are now 35. We have bumped into each other through the years and always flirted but one of us always was in a relationship.

Three years ago, he actually told me he always had feelings for me but I had a boyfriend at the time.

So we went out for drinks, he literally planned our 2nd date before we even went out the first time. Things were awesome and we spent at least 1 night together each weekend and he called me every night...... We work opposite shifts so that was all we could get in.. Which was ok by me so I still had time for my stuff and friends.

He was referring to me as his girlfriend and we were starting to talk about the future (in hypotheticals of course!) it was only 5 weeks.

He quit smoking the night he bumped into me because he knew I wouldn't like that and he changed his work schedule just to come to my god sons tee ball game "because it was important to me."

He was doing all the things I wanted a boyfriend to do for me and I was literally on cloud 9. I truly believe he was too. 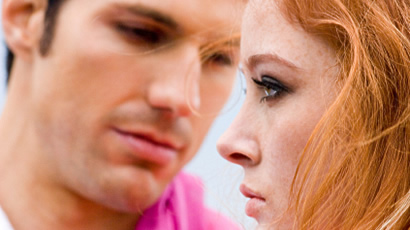 Then his ex girlfriend called him and wants to get back together. After 3 days of being distant, he finally called me and told me he was confused.

I told him to take the time to figure it out and I found out last night they are still working things out but aren't official YET.

Ugh, I am distraught.

So my question is.... Do you think I have a chance with him again?  He really is amazing and a great guy and makes me feel awesome.

I guess the ex broke up with him and it has happened before.... She is also 25. Or should I just cut my losses? If I try to get him back.... How do I go about that?

Please help me! I know that sounds needy and I'm not that person. I really felt like we had something special and it was finally the real deal and I'm hurt, disappointed and sad.

Hey, Cindy... glad to hear your good experiences with the program...!

As for your question about this guy, let me see if I can help you figure out your situation better.

The problem with ex girlfriends are that they have a lot more power than they should when they break up with the man.

You see, men don't feel a lot of control when it comes to the end of a relationship, and if she did the breaking up, that means he may not have had closure.

Which means, unfortunately, that even though you two have a much more promising potential at this point, he's emotionally hung up on "Why did she dump me?"

The loss of a relationship to a man is slightly damaging to his masculine identity. The mere fact that she broke up with him creates an artificial sense of value in his little lizard brain.

Part of him will - no matter how illogically - want to reclaim that flawed and possibly damaged relationship, simply because he's feeling more emasculated by the breakup and wants to recapture it again to recapture his own sense of worth.

(Unfortunately, we are more motivated to regain something we've lost than to pursue something new when it comes to relationships. He's probably even got some false sense of nostalgia with the other girl.)

This doesn't mean, by the way, that he isn't genuinely digging you and what you have. I think you realize it's not just a rebound based on his previous interest in getting together with you.

The one thing I'd need to know more would be the dynamics and reason for the previous breakup, among other things.

But just based on your situation, here's what I think....

If it was generally "not working" between the two of them, it's really only a matter of time before it would fail again and he'd be back to you.

But you can't afford to let him (unintentionally) take advantage of your boundaries.

I would suggest you do this: Put him on hold.

When a man says he's "confused," what he means is:

"I want to have the best of both worlds. I'd like to see if I can make it work with HER, and know that I've got a safety cushion with you."

You have to tell him:

"Hey, dude... that's fine. You go do your thing. But I can't hang around here waiting for you to realize what a cool, special thing we have right here. I've got a life to get on with. Fun to have, adventures to make."

"So if you want to recapture that thing with her, go right ahead. You don't need me to remind you of (this is where you politely and gently remind him of all the reasons he told you that the other relationship WASN'T working out.) I hope for only the best for you. Sincerely."

"And you and I both know that if it doesn't work out with her again, I might have already moved on, too. It's just a fact of life. (He will now remember that this is something you two tried to have before, but didn't because of timing. It will make him remember that your relationship has value right now, too.)"

"So if you need to go back to her and make another attempt to make it work. Go ahead. I won't stop you or get in your way. But if it doesn't, I won't guarantee that I'm going to be here waiting for you, either."

You have to let him know he's free. And that you're not going to be his "insurance policy."

He has to be able to make this decision for himself.

If you were to try to hold on to him, he'd only feel more compulsion to go satisfy his curiosity about making that other relationship happen again.

And he might do it through being sneaky. This also allows him to be honest about his intentions - to you and to him.

AND his decision for you will be made all that much easier when he feels that he now has something to lose with you.

He can't feel that possible loss if you keep seeing him while he runs around confused and being led around by his "little head" - and his sense of inadequacy from a previous relationship.

Give him the gift of missing you, as my mentor once said, and take control of your boundaries by letting him know right where they are.

Most women would probably try to hold on to him, and that would be the kiss of death.

Whereas if you are the one to send him on his merry way, he will see that you value yourself - and that is INCREDIBLY powerful and attractive to a man.

You sound like you've got a good head on your shoulders, and NO - you don't sound needy. In fact, it's only because you seem to have a sense of abundance that I give you this path.

It's not an easy one, but it's the one that gives you and him the best chance for making it. Because I do think you have a chance.

(Oh, and if you two get this thing back together later, I've got some great tips later in the Forever Yours Program about how to pace things so that you can keep him completely adoring you, and never even think about straying again.)

Please let me know what happens down the road... I'm sure you'll land on your feet.

And I'm also rooting for the possible future you two could have.