Your Perfect Relationship DOES NOT Have A Deadline

Do you want a perfect relationship? I want to let you know that you don't have to rush.

There’s a scene from the movie “My Cousin Vinny” where Marisa Tomei tells her lawyer fiancé (played by Joe Pesci ):

“My biological clock is [taps her foot] TICKING LIKE THIS and the way this case is going, I ain’t never getting married.”

And for some reason, it got me thinking about how some women look at dating. 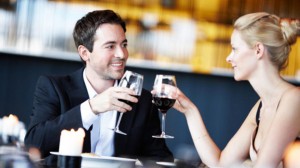 There’s this misplaced sense of urgency coming from these women, and it doesn’t do the world of relationships any good for both parties.

From a guy’s perspective, it’s kind of wears a man down to be “rushed” into a relationship because his girl’s giving him ultimatums about whether he wants to be “in for the long haul” or not.

On some level, I get it, really. It makes perfect sense for a woman to want to find that one person who can make her happy and grow old with.

But plenty of men would say that they’re scared of commitment when this desire escalates to somewhat unreasonable levels.

Living in the Now

Tim, a clothing store manager in Ohio, tells me, “I wish most of the women I dated would slow down a couple of notches…sometimes, I can feel that she’s looking way too far into the future.”

And that’s one of the biggest turn-offs for guys – being too distracted.

It’s not sexy when you’re not at ease or in the moment. Here are some of the telltale behaviors:

(“Is he going to be a good boyfriend?”, “I hope he’s not commitment-phobic”, “I wonder what our babies will look like?”).

(“Is he interested in a relationship?”, “I probably won’t hear from him after this date…”)

Believe me, that’s too much mental static to deal with.

If you really want to attract a quality guy, just be in the moment.

Of course, we all want things to go “as planned” – but when it doesn’t, it shouldn’t dictate how we feel about ourselves.

For instance, I’ve seen a lot of cases where women feel like they won the lottery after hitting it off with their date. On the opposite side of that spectrum, I’ve also seen women feeling absolutely horrible when he didn’t turn out to be Mr. Right.

And that’s the worst thing about having an “everything needs to go according to plan” mindset. When your self-worth is based on these things, you’ll never have that relaxed attitude that attracts men.

Sit Back and Enjoy the Ride

Here’s a mental trick to get you into that laid-back frame of mind that puts men at ease: understand that NOT everything is riding on that one date.

It happens all the time in professional sports. There’s always that guy choking from the pressure of having to make that one shot count.

Don’t listen to that voice telling you it might be “too late” if you don’t act now.

It’s ironic, but the more invested a person becomes in making something happen, the more likely she’ll blow it from being too distracted.

An unsuccessful attempt isn’t going to trigger a butterfly effect in your life and leave you in disarray. I know plenty of women who are happily dating in their 50s and beyond.

They’re doing just fine because they know that a relationship isn’t an end result they have to achieve.

Instead, they’re more focused on the most important task at hand: Having fun!

That’s really what dating should be about, which is enjoying the company of that person in front of you.

It doesn’t matter if he’s the one you’ll be spending a quiet evening at home with after the kids have left for college.

Same goes if he doesn’t turn out to be anything more than another guy you met along the way.

If you want to meet your dream guy faster, step aside and let it happen.

Remember: Don’t put too much energy in playing psychic - channel that instead into being fun to be with. And everything else will follow.

By the way, I do know one way to get a guy, minus the needless hemming and hawing. It’s a skill that you can immediately learn and apply without putting too much time or energy into it.

You simply have to figure out a man’s Connection Style, and women everywhere have benefitted immensely from it.

Click here to learn how to make him come your way without breaking a sweat.