The 3 Most POWERFUL WAYS To Be An Attractive Woman - NOW!

If you're a woman who wants to be attractive, there are some short-cuts.

The most important first step is - of course - to find out WHAT men find attractive!

As a man, I can tell you: Being an attractive woman that men love comes down to your thoughts and actions.

Everything that goes through your mind and what you do every day are the best way to tell men what kind of girl you are.

Here are a few ways to be at your most attractive:

Attraction Tip #1: You Are What You Think

Now, you’ve probably come across people saying that the universe hears your thoughts and makes it your reality.

Personally, I’m a kind of guy who believes that your thoughts don’t necessarily feed into an unseen force. What I do like to think is that a person’s thoughts dictate her actions.

I mean, if you focus on looking at the world in a certain way, then everything you do will make that that personal reality happen.

In the same way, self-defeating thoughts like “All the good men are gone”, “Men are allergic to commitment” or “I’m not cool/pretty/skinny/rich/awesome enough” are examples of thought patterns that determine your attitude and dating success. 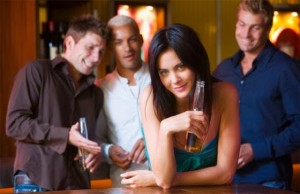 Remember, the attitude you have about yourself - and towards life - is like an invisible sign telling other folks how to treat you as well.

Attraction Tip #2: Act Out Of Authenticity

Here’s what I’ve learned in my dating experiences – you’ll get as good as you give.

For instance, a guy can tell if a girl is trying to get something out of him, like a relationship for the sake of having one, or a forced sense of intimacy.

Chances are, he’ll hang on for the ride and get something out of it as well, like another notch on his bedpost.

So, manipulation works both ways. If you want to avoid this situation, you need to attract a guy without any sneaky tactics, like:

Self-respecting behavior, on the other hand, naturally attracts the quality guys in your life. To give you an idea of what this means, don’t make the relationship your one and only goal in life.

When you treat it as one part of the bigger picture instead, then you’ll go into a relationship without the needy tendencies. Keep living your life and don’t put it on hold for any guy.

Attraction Tip #3: In The World of Dating, Femininity is King (or Queen)

They need the freedom to explore their masculinity, which is what their male relationships are for.

And that’s the beauty of being the woman in his life. You don’t have to act like one of his guy pals just to please him.

It’s your feminine traits that turn him on, not because you don’t “throw like a girl” or can match his sports trivia. Those are great qualities to have - as a FRIEND, not as a romantic partner.

If you want real chemistry, it’s your “girliness” that will get him. I don’t mean being like a helpless damsel in distress or giggling and acting demure 24/7.

What I’m saying is that the contrast between his masculine traits and your feminine side is the very thing he’s after.

Here are some feminine qualities that don’t require you to overdo it:

So in other words, the biggest factors to make a guy fall for you is being a positive person, acting without manipulation and embracing your softer, feminine side.

Once you work these habits into your everyday dealings with guys, it won’t be long until at least a handful of them will come knocking on your door. It all starts by going here.