The Truth About How To Understand Men (& Relationships)

Here's the truth about how to understand men - and relationships:

For a man, the physical relationship is super important. It's how he connects with you.

And, for the most part, guys are going to sleep with a girl they’re attracted to regardless of what’s going through their mind.

He’s probably not going to have some internal conversation like, “Hmm, should I go to bed with her? I mean, I don’t know yet if I’m fully committed to her, so I’m kind of hesitant…”

Nope, he's just going to jump at the chance for sex.

For men, that self-reflection comes AFTER the fact, not before (and especially NOT during).

And I’m not knocking on guys for being that way – that’s just how they’re hardwired.

More often than not, a man is a creature driven by the constant need to achieve some sort of end result. When he’s out to make something happen, he’s going to put all his focus and energy into it until he gets the desired results.

When he does, he’ll think to himself, “Well, that was fun. Should I do it again? Or should I move on to something else?”

After you sleep with him, this same kind of thinking is likely to kick in. And just to make it clear, this also happens to be the single most important determining factor in your future relationship. 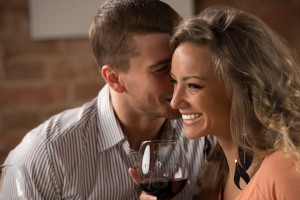 The thing about commitment is that it’s NEVER a decision you can force a guy to make. The most you can do is guide him towards it, as opposed to a draw-the-line-in-the-sand approach.

Without a doubt, he’s going to enjoy the sex, but that’s not the issue here.

This applies to all people, but it goes for double for guys: sleeping with him is by no means a contract for him to stick around.

From a guy’s perspective, he has a few conditions that need to be met before he can make the decision to commit to someone:

When a guy made the team in high school, it was special to him because he had to prove himself before getting picked.

If the coach just slapped a varsity jacket on him just because he showed up at the try-outs, it wouldn’t have meant as much.

That’s kind of how dating is for men as well.

If he doesn’t get the same satisfaction from ‘winning’ the chance to be with a great gal like you, he wouldn’t have much of a reason to pursue a long-term relationship.

Getting Him to Stay With You

Here’s what you do: first, make him feel really great whenever you’re together. Focus all your attention on him, and make sure you’re having a ball.

So whenever you’re with him, let the fun side of your personality shine. Make it a great experience for your guy – he’ll want more of it and that’s all the motivation he’ll need.

On the other side of the coin, you shouldn’t constantly check with him on where you stand or bug him all the time to see you.

If you have an attitude that says, “Are you feeling that chemistry yet?”, he’s not likely to feel those fireworks with you.

Instead of pressuring him, stay chill and pull back a little every now and then. Don’t be available to see him at a moment’s notice all the time – you’re not a firefighter on call!

Keep living your own life and stick to your daily schedule. Make ample time for him, but don’t drop your other commitments.

Let him make plans in advance and let him know whether the time works for you or not.

Above all, don’t agree to be his booty call!

This is the perfect antidote to the infamous booty call. Setting the bar for good behavior will keep him at his best and make sure he respects the time you do spend with him.

If he sees that you’re bending over backwards to accommodate him, he’ll simultaneously find it off-putting and suffocating. He won’t want to be with someone who’s too intense or doesn’t have a sense of balance.

Sure, there are players, but that doesn’t mean there aren’t men who won’t want to commit given the right conditions. And yes, there’s always a risk involved (i.e. him not wanting to stay), but anything worthwhile doesn’t come that easily.

And that’s the whole point. Nothing awesome – like a healthy relationship for example – falls out of the sky.

It needs to be cultivated and cared for so it can blossom.

Oh, and if you’re worried about sleeping with him before you feel you’re ready, you can adjust the escalation level based on what you do and DON’T do.

In fact, guys unconsciously want YOU to call the shots. They just don’t have that same calibration when it comes to sex, so make sure to give him the right cues.

Keep any jokes within PG-13 territory – if he goes into rated R stuff, steer the conversation back on track so he doesn’t get any ideas.

Here’s another tip: no guy comes up to a girl’s place at midnight, thinking it’s just for “coffee” or to admire her art collection.

So it’s best to avoid getting trapped in any position that might make him think you’re ready when you really aren’t.

Also, keep your exchanges of affection out of isolated areas. Make him feel that you’re into him with a little kiss or hug, but avoid letting it escalate by not being alone.

Restaurants, movie theaters or anywhere with people around are good places, for instance.

So the message you should get across is that he’s in good standing, but you need time to take things to the next level.

If he’s cool with that, he’ll get the hint and stick around. And hey, don’t sweat it if he isn’t.

If anything, if he leaves it just means you are meant for someone else who’s going to value you.

I know how tricky it can be to figure out what’s going on in a guy’s head. If you knew for sure, it would be much easier to decide how to move forward.

But sometimes, you just don’t know if he’s truly interested or not.

Fortunately, you now have a way to read him like a book, and it’s as easy as checking out this fantastic new course I’ve put together, CLICK HERE