7 Signs He’s In Love With You

So many times in a relationship we find ourselves wondering if the person we’re with shares the same feelings we do.

After all, love is tricky. It’s hard to know what’s real and what isn’t when it comes to emotions.

We’re just looking for that reassurance that our heart is invested in the right person. After all, a guy can say he loves you and not mean it.

And, just as likely, a guy can be madly in love with you, but be afraid to say it. 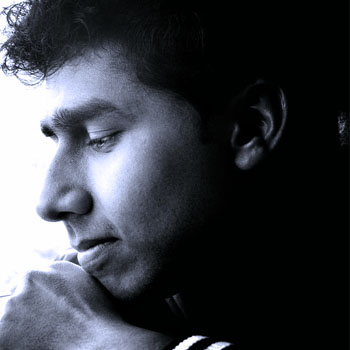 The problem is that you can very often get caught up in looking for signs where there are none, and you lose your present-moment focus on the relationship.

And when you get caught up in your worried thinking instead of the real experience of it, you can lose control of your anxieties.

You might panic and let your insecurities run away from you.

Does he love you? Let’s take a look at 7 signals that will tell you if your relationship is safe…

There’s a reason that the eyes are called the seat of the soul. And the eyes are also the one place that it’s hardest to lie from.

Sometimes we’re afraid to look too deep into another person’s eyes for fear of what we’ll discover.

When your man looks at you, do you see the glint of love, or do you get mostly apathy?

If your man is in love, he’ll look at you with a longing that will speak volumes about his true feelings. You only have to look to see it.

You’ll also see if he has a tough time NOT looking at you – as if he can’t get enough of you. 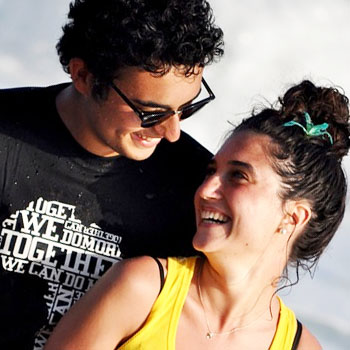 That’s the way it is with guys and their feelings. We have to keep looking to convince ourselves the romance is real.

If he’s drinking you in with his eyes, that’s a good thing…

Love you or love you not – Signal #2: He Remembers What You Say

This is a bit of a mixed bag, because it might seem like your man doesn’t hear a word you say. But if he’s in love, he’ll be listening for the stuff that counts.

This means he’s paying attention to things like special events in your life, or names of people you mention.

He may not make a big deal of it at the time, and you may even wonder if he heard you, but it will sink in. And then it will come out when you least expect it.

(And he won’t be remembering your words just to use as a weapon against you – or to prove himself right.)

Maybe it will be your favorite kind of flower, or that dessert you love so much. But when you least expect it, he will surprise you with it. 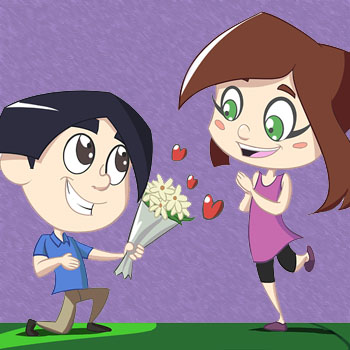 Even better is when he hears what you’re really trying to say UNDERNEATH your words.

And you thought he wasn’t listening…

In order for any relationship to flourish, you can’t be stingy with your emotions. There has to be a surplus of goodwill and love in your relationship.

Some couples I’ve seen have had more than enough love to go around, and it overflowed into their friendships and every area of their lives. When they got together, it was like there was a limitless supply of happiness that only needed them to touch. 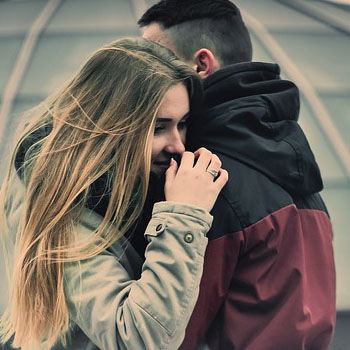 Then there have been other relationships where the resentment seemed to have built up to a constant frequency of anger inside them. You could tell that one or both of them was starving for affection and recognition, but their partner had none to give.

You just knew it would only be a matter of time before they were broken up.

To really keep a relationship going, you have to find yourself a giver, not a taker.

Yeah, we all make a few withdrawals from the emotional bank account from time to time.

But the deposits have to be greater over time. If he’s taking too much without replenishing you, soon your tank will run dry and you’ll ache for the refill.

So look for his emotional generosity to be a clear signal of his feelings for you.

When it comes right down to it, the one thing we all want more than anything is to be seen – and accepted – for the real person we are. 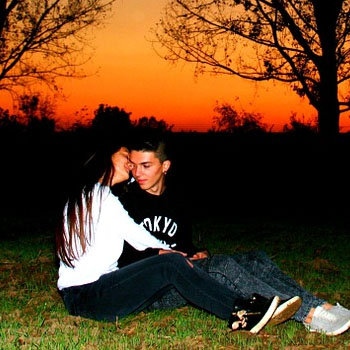 That fear of being rejected for that real person we are can make us do some unhealthy things.

But the man that’s in love with you will be able to get past all the bluster and pretense that you might put up to protect yourself.

He’ll also understand and decode the way you are with other people better than anyone else. This means he’ll probably see things about you that YOU might not even recognize.

Which means if you’re not living up to who you are, or your true character, your loved one will call you on it and let you know.

And you have to be able to see that as a truer love than the one that only tells you what you want to hear.

A guy that really loves you is going to find it hard to consider anything a priority over you.

Yes, there will be times when he’s got his head down and focused on his career. This is because he’s engaging his “provider” drive – which every man does at a certain point in his life.

And yes, he will occasionally focus on his friends or a hobby that gives him a sense of accomplishment and recharges his batteries.

But in the end, YOU will stand out as his priority in life. He’ll want to make you happy, and seeing your joy will mean the most to him.

A man needs to feel like he can really make his girlfriend or wife happy. If he can’t do that, he feels like a failure in the relationship. 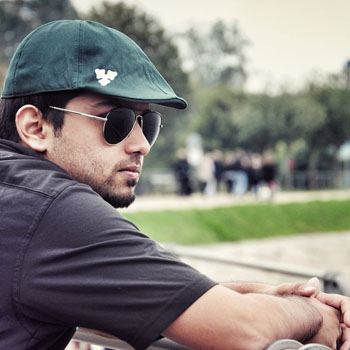 So if you let him know something irritates you or doesn’t make you happy, and he keeps on doing it, that’s a good sign he’s either not in love, or something has him feeling that you’re not on the same team.

A man who loves you will seek out the things that make you smile, and he’ll do them as much as he can.

This is a sign that most women overlook. It’s the one that many women even resent.

Have you ever had a guy drag you along on one of his pointless trips to a music store, or that place where he gets scrap parts for that beat-up motorcycle he’s been restoring for the last four years…? 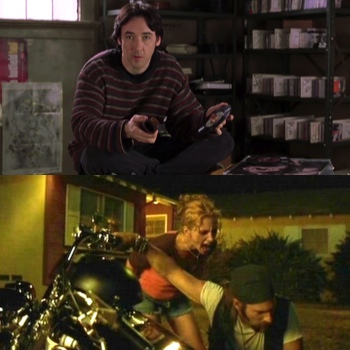 You might not find them fun or exciting (much the same way he doesn’t enjoy going shopping with you all the time), but they mean a lot to him. Even more, in fact than it might for you.

You see, men bond differently than women do. For a guy, the depth of his feelings – and the extent of his loyalty – are largely a factor of *how much time he spends with you.*

In fact, time spent doing absolutely nothing with him is the best kind of time for him. It’s quiet, peaceful, and the highest quality time for him.

So don’t disregard his request to come along on seemingly pointless trips to do almost nothing. It means a lot to him, and it’s a sign of love that he wants you to participate in it.

This is one that every woman wants from a man. But how do you measure commitment?

– Is it in a marriage proposal…?

In the end, the only indication of a man’s commitment is his PRESENCE.

Is he THERE? There for you, and keeps on keeping on? 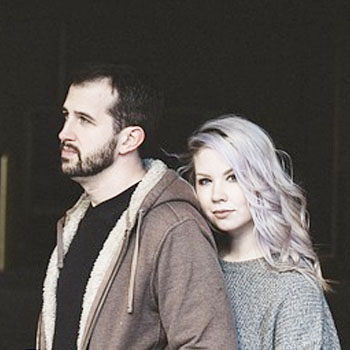 That’s the indication you should look for. A man declares his commitment with his presence in a relationship.

He probably won’t be making a huge gesture like standing outside your window in the rain playing a love song, but he will make the far greater gesture of sticking it out with you. Especially if it’s through tough times.

Look, if you’re a woman, you’re always going to be a little anxious about the state of your relationship. But you can’t let those fears and insecurities sabotage something good.

They can easily get away from you and hit the panic button in your relationship.

But if you see that he’s in it with you – and he’s not quitting – that’s a big statement of his feelings. 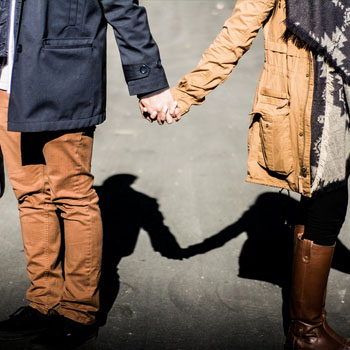 There’s a lot of things to love about every person out there. Some people think that love is all about how the other person makes you feel – which is a selfish definition.

That’s a love that’s only self-serving.

Some think it’s the acts of kindness they bestow on you – the things they do for you. Which can still be a little selfish, but partly true.

Ultimately, a man’s love is a powerful force – much more than many women realize. You’ll see it in his actions most of all.

You’ll see it in the things he does for you, as well as the care and effort he puts into the things he knows are important to you.

There are many things that make up a loving relationship between two people. Because sometimes even the feelings are not enough to make a relationship successful.

You need to know the skills to create your own True Romance with the man in your life. Click HERE to read my article on how to do this and enjoy a deeper, richer connection with him.