Back when you first started dating him, you wanted to make him chase you. In fact, that's the natural goal in any relationship.

To be fair, there's a little of each person that should be chasing, but it's most important for the man to chase the woman first.

"Why? I mean, c'mon Carlos... We're in the land of equality and female empowerment here! We should just be able to stop doing all these primitive mating rituals and just act like one giant genderless society, right? RIGHT?" 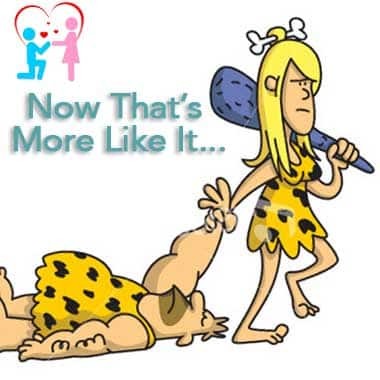 Okay, excuse my sarcasm there... Hopefully you smelled what I was cooking up with that.

The reality is that ATTRACTION is NOT logical.

And, if I may be so brave, attraction is not a CHOICE, either. You don't get to just pick who you SHOULD want to feel attracted to. We don't get to come up with an inventory, interview a bunch of people, and pick them out.

"Hey, you're a good match. I'll meet you for drinks on Friday and get attracted to you."

So why do we argue with this concept over and over?

Well, the good news is that you can influence a man's attraction.

In fact, you can downright guide him into falling in love with you... if you want to.

But we'll get back to that in a bit. 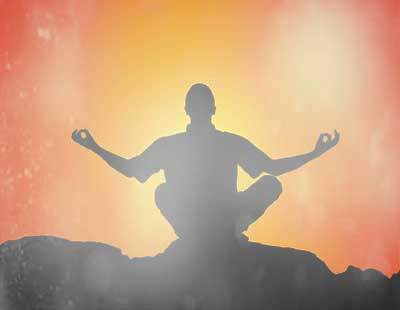 I had a female friend that used to say: "I'll get him to chase me until I catch him."

You should make that your personal mantra. It's GOLD.

Right now, I want to show you a few tricks 'n tips for how to get him to chase you.

I know this should be obvious, but I need to say it. If you want him to start chasing you, you have to stop chasing him.

Think about it - do you ever see a Chase-Chase dynamic anywhere?

There's a dynamic that's created by nature, and it's chase/be-chased. You can let that flip-flop back and forth a bit, but the overwhelming majority of chasing is HIS responsibility.

If you are chasing him right now, you need to cut that $#&% out. 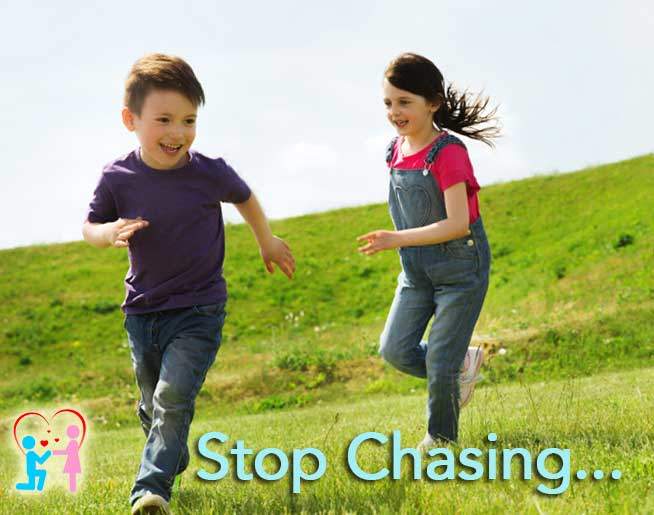 Make him work for you!

Chasing is an emotional message, and it reads like this:

"I'm chasing you because I find you attractive and valuable. And you have the value that I want to have in my life."

I get it. It's tough not to start chasing him. After all, the first time a man pulls away from you, your first impulse is to panic. "Oh NO! I'm losing him!" your insecurity screams.

But the women who really understand men know that they can't let themselves fall victim to this panic impulse.

If you lack this emotional self-control, you should find a girlfriend that can help talk you down from the ledge when it happens.

I know, you're probably saying - "Carlos! I don't want to play games!"

The game playing is wrong when you use it to achieve a selfish end. Or strictly as a shortcut.

But social games serve a purpose. And the people that avoid them are typically the ones that often don't do well at them.

Remember: As a woman, you're the steward of the relationship. It's up to you to take the leadership role in making your relationship - or marriage - whatever you want it to be. The guy will usually follow if you handle him the right way.

So believe me when I tell you that it's imperative that your man NOT think he's got you all locked up. You need to leave a little doubt and uncertainty in his head that he's the only one competing for you.

We need it to help push us to perform at our best. 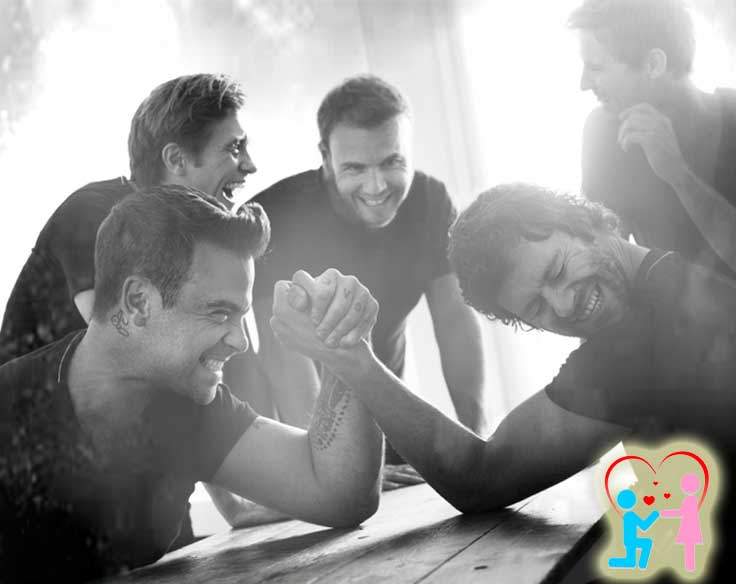 How can he win you over?

Without it, we're lazy slugs that sit around and binge watch shows in our underwear while playing video games...

Give him a reason to work for you. The chemicals that get released in his head during competition are what help to lock him into obsessing over you.

These are the love hormones that make him want you.

So in short, stop trying to NOT-BE-SINGLE. It's killing your game, woman!

Men want a woman that's not chasing commitment like a cat chases a laser pointer.

I'll tell you some more secrets about how to do that in a bit...

One thing every woman knows is that men are very driven sexually. We are motivated by sex.

If you want a guy to fall for you and start chasing you, you've got to start his physical desire for you. 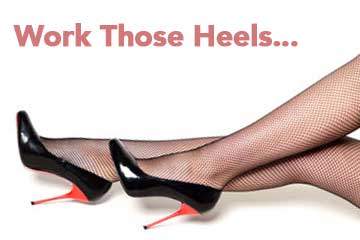 Get his motor running.

Here are just a few ways you can inspire his desire for you:

Never underestimate the value of sparking his desire for you.

But as a warning: Don't rely completely on this. I've seen a lot of women work only this angle, and find out that men won't take them seriously as a possible girlfriend. He's looking for more than physical intimacy, and he knows when that's ALL you have to offer.

Raise your standards instead of lowering them.

It's perfectly natural for a woman to want a relationship faster than the guy does. It's part of your nature.

But that doesn't mean you should obey it. Sometimes nature leads you astray.

There's a saying in the business world that works in the dating world: 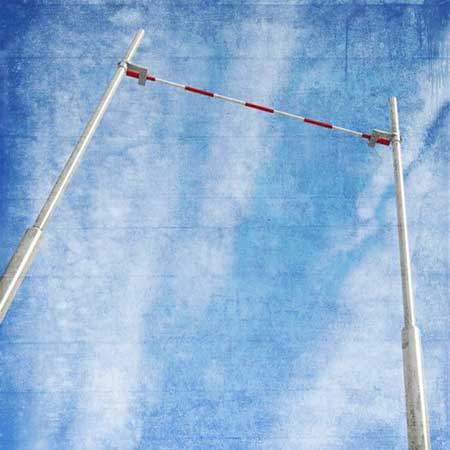 You need to know as much as you can about him in advance. Take time before you make that "hiring decision."

I can't tell you how many women write in to me to tell me that they are in love with a guy and want him so badly - even though she knows he's NOT her soulmate: He's married, and they aren't even compatible...

...BUT she still wants him!

It happens when you let yourself fall for a man that hasn't proven his value to you yet.

Don't be so quick to hire him for the most important position in your life. If you choose poorly, you'll just find yourself in an attorney's office a few years down the road, wondering how it came to this.

You can create a magical romance - but it needs to be with the man who deserves to have you.

The secret to getting a man to fall for you and chase you is to know how to make him think about you when you're not there.

When you know how to get him to fantasize about you when you're not there, you have won 99% of the battle for his heart.

Men are simple - but not dumb.

We have a very simple way of thinking, but it's also not intuitive to women. Mostly because, you don't think the same way. 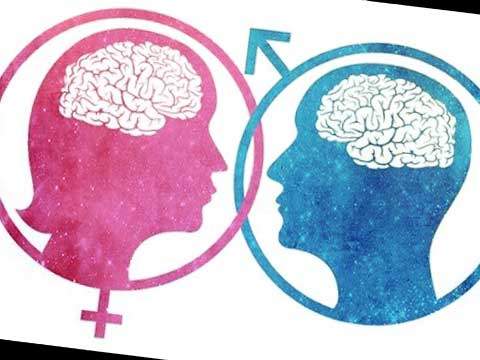 What are the differences?

So you have to be willing to suspend your "chick logic" and realize that men have their own weird form of "guy logic." (And no, it's not really logical at all - which is why you're probably confused about what men want.)

The secret is in how you get him to obsess over you...

Look, you may have noticed one bit of cliché advice that I did NOT tell you: "Have an exciting high quality life that every man wants to be a part of!"

But the reality is that if you don't already have a fun, exciting life right now, my telling you to get one will probably not make you change your life completely around.

I will mention nicely that you shouldn't ignore this advice, though. If you're living your life for your relationship - or the next one - you're going to find that you're chasing your own tail.

Take some steps to move yourself in the direction of your happy-even-if-single life. Don't look to a man - or a relationship - to complete you. 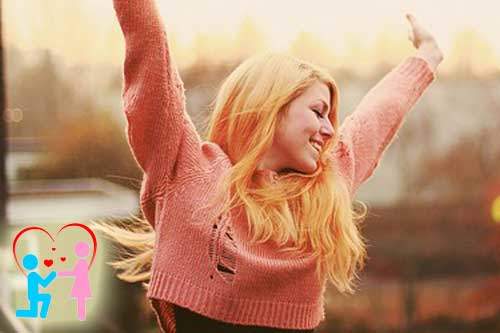 As much as I love the movie "Jerry Maguire" - the part about "you complete me" is dysfunctional crap. If you're not already complete going into a relationship, you will find that your gaps will not stay silent in the background.

Now, there are other ways to get a man to see you as his favorite obsession...

The key is to flip the obsession switch in his head.

This is something that your mom, your girlfriends, and those magazines at the grocery checkout do NOT know about. In fact, I'll bet that 95% of the women (and men) in your life don't know about this.

I created a special report for you - go read about how to flip his obsession switch HERE...